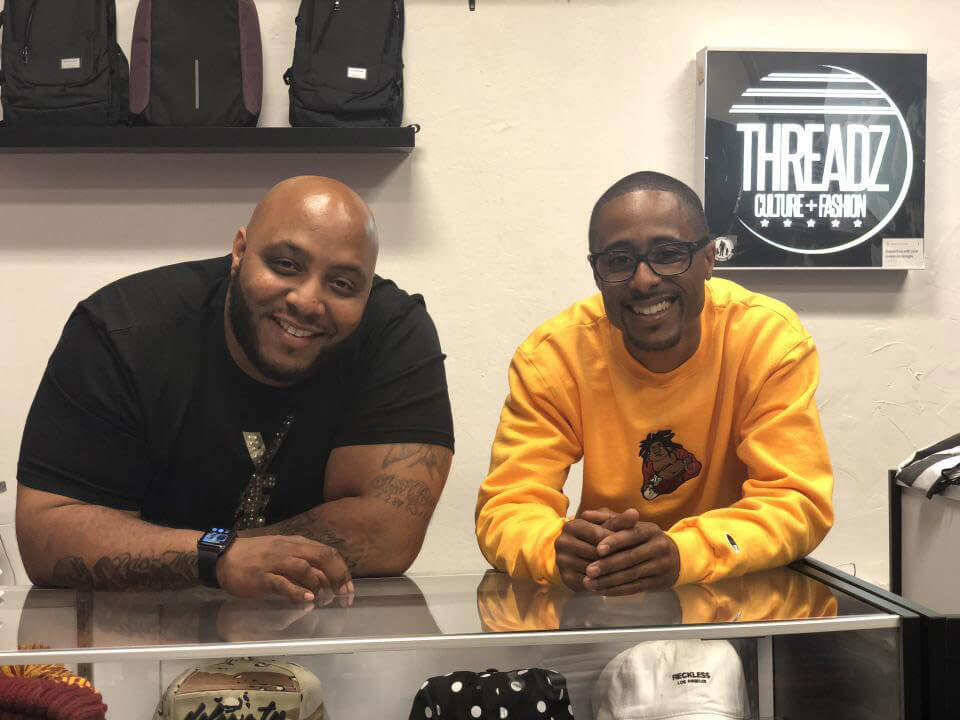 This week, I had the pleasure of interviewing Chris McMichael, co-founder of Threadz Culture + Fashion. Threadz is an urban clothing retailer for men and women in Oakland, CA. In this interview, Chris talks about how he got started and his journey of opening up a brick and mortar location with his co-founder Maurion Gaines.

What inspired you to start Threadz?

As a musician, I was inspired to do a clothing line. I toured with big artists like Hieroglyphics and learned the value of having merchandise while on tour. It’s a big profit margin.  I always sold my t-shirts and CDs. The t-shirt line just happened to be bigger than I ever imagined it. And it expanded beyond t-shirts to include hoodies, thermal hoodies, letterman jackets, legging outfits, beanies, snapback hats, etc. It became a staple in Oakland for people to have FEVAH Lifestyle clothing.

But, I got to the point where I didn’t want to be selling out of the trunk anymore. I thought it took away from the value of my clothing line. I thought the presentation of it would be better in a store.  That’s why I acquired a brick and mortar location.

So, I presented the idea to my friend Maurion Gaines. It was a no-brainer. We had to do it.

Are you still making music? And if so, how do you balance it all?

Yes. I just finished a music project last week. The project will be called FEVAHTUBE Vol 1. It’s got 6 tracks from producers around the globe. This project was fun. It was actually recorded at Threadz in our little music studio. It will be the first project released from the store. So, I’m excited about that. I’m just getting back into the groove of music. I got away from it while starting the clothing store. I’ve been more focused on building the brand of Threadz for the past few years. Now, I’m able to combine all of it together.

The trick to balancing is that fashion and music go hand in hand. These days, everyone who’s into music is also into how they look, where they buy their clothes, what they look like on and off the camera, in social media and everything. I think it was a good idea to combine the two. And now, I can combine the store with recording in one building. It becomes an easy balance.

What was the process like for you to open up your first brick and mortar store?

But, I went into opening a brick and mortar with no knowledge of business ownership. I knew I needed to get vendors. But, we were the new kids on the block in an environment with so many urban fashion stores in our area.  And, vendors have their go to stores – people they’ve been dealing with for a while.

Then, there was a question of building traffic. Letting people know we were there. What we represented. What we stood for. That was a challenge.  But, we quickly won over the community and were recognized.

We went from zero vendors to 150 vendors in a matter of two years. We’ve been nominated for an Oakland Indie Award, A+ accredited by the Better Business Bureau, awarded Local Heroes by the Vice Mayor of Oakland, and were selected to go through Main Street Launch’s Entrepreneur in Residenceprogram and Uptima Business Bootcamp’s Funding a Business program. And, I was elected chairman of the community development program by the Vice Mayor.

It became a snowball effect of success through a lot of trial and error.

You mentioned that over the last year, you’ve done some entrepreneur training programs with Main Street Launch and Uptima. What did you learn?

My biggest takeaway from Main Street Launch’s EIR program was certifying myself as an entrepreneur in my city. I came into this business out of the trunk with hand to hand sales. Through the EIR program, I learned how to do a SWOT analysis to understand my business performance, write a business plan, structure my business, build a team. Learning those things really helped me make a roadmap in business. So, it’s not so frustrating at the end of the day because I know what we’re moving towards and what we can do.

You recently had an incident at the store. What happened? And, how are you recovering from it?

We had an incident right before our two-year anniversary, which would have been September 24. The day before, a fire happened in the building next door to us. That caused smoke damage in our store, and we’ve had to close the store at a critical growth period in the business. That has been a major roadblock for right now. I’ve been dealing with that.

The love of the business is still there. The support online is still there. The loyal customers are still asking and coming around to see what they can do to help get the store back open for the community. The mayor jumped in, is excited about working with us, and for us to be a flagship store in District 4.

But right now, we’re in the process cleaning the store. I’m running a crowdfunding campaign with Kivato raise money. Our trustee is Mayor Libby Schaaf. The crowdfunding is a 30 day process. In less than 15 days, we’re over 80% of money that needs to be raised. We’re looking forward to getting it done before the deadline.

I understand this is the first time you’ve raised money for the business. Tell me a little bit about that.

Yes, this will be the first time we’ve reached out for a loan. So far, we’ve financed ourselves through our hard work and savings.  With all the education we received, we learned it’s okay to take on a loan to get capital for the business. We’re looking for the money to get the business back up and running, get inventory back in, and employ local youth in our area.

What’s the thing you’re most proud of in this business?

I’m most proud of the response that we get from our custom orders. The fact that we can bring the things that were in our customers heads to real life. We can help people learn how to grow their business through custom branded items. It’s important to me because in that process I get to mentor and help people start their clothing lines and live their dreams through Threadz.

What advice do you have for people starting and growing their businesses?

My motto is “Hustle for everything, settle for nothing.” Keep going. Period. There’s going to be a lot of naysayers. People telling you that you can’t do it. But, it’s possible. You just have to keep putting one foot in front of the other daily.  It’s not going to be easy, but it’s going to be worth it.

You can shop online at Threadz Culture + Fashionor drop by their retail location at 5319 Fairfax Avenue in Oakland. And, you can support Threadz in reopening their store by contributing to their Kiva campaign.