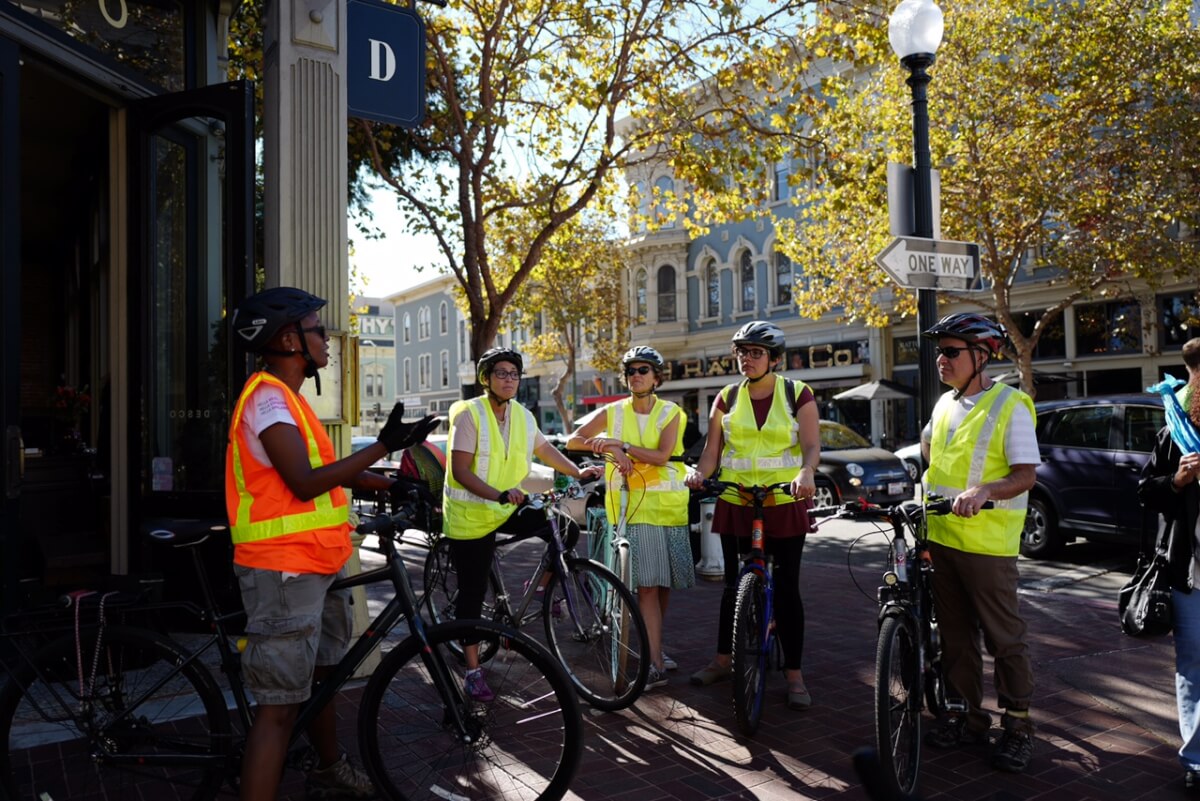 What inspired you to start This Is Oakland Bike Tours?

There’s a couple of different things. First, I like to travel a lot. My wife and I travel quite a bit. As educators, we had an opportunity to use our time off from school to try to see as much of the world as we possibly could. During those travels, we went on bike, walking, and food tours, and took a lot of notes. I thought I could do those kind of bike tours in Oakland.

In addition to that, my wife and I had spent years as caregivers to our moms before they passed away. This Is Oakland Bike Tours now is also about finding a new path for myself – resetting and reconfiguring my life and finding some new inspiration.

How do you know so much about Oakland’s history?

I’m fourth generation in Oakland. So, I’m drawing on history passed on by my family members who grew up here and experiences growing up here myself, as well as other connections and anecdotal information passed along in our communities.

Why Oakland? Why Now?

Growing up here, I feel like I have seen everything. I’ve seen Oakland struggle with trying to garner tax revenue and trying to pull businesses in. When I was much younger, I saw Oakland as a focal city with a large black middle class population and a lot of homeownership. And then in the 1990s and early 2000s, I saw Oakland during the downturns. Now, I feel like we’re in another renaissance era in Oakland, and there’s so much to offer. I think it helps that Oakland was written about in The New York Times in their 36-hour piece and such. I live in the Uptown area, and I’m watching that bloom and watching businesses spring up. Through This Is Oakland Bike Tours, I want to find ways to support those businesses and make sure that people that aren’t directly benefiting from this new renaissance are also getting some help from it, even indirectly. I feel like This Is Oakland Bike Tours is just in a good place to share and show off Oakland and give back to the community.

Can you talk a little bit more about how This Is Oakland Bike Tours gives back to the community?

As an educator, I’m really concerned with the system both here in Oakland and the Bay Area in general. In the summers, I plan on offering Teacher Tuesdays, free tours to educators with a priority going to Oakland Unified educators. I’ll most likely add a curricular piece, so if teachers want to do a unit in their classrooms on Oakland, they can have some background and good information about the history of our city.

In addition, I care deeply about certain issues. Both my parents were veterans in the military. We have this huge homeless crisis in Oakland right now with people losing their homes and being forced onto the streets. And as an educator, I’ve run into a lot of foster youth in our community. I want to be able to touch on these issues with the tours.  So, with every tour, I’m giving 10% of the cost of tour to community organizations.  I’ve curated some charities doing really good work in Oakland: the Homeless Action Center, which provides legal services to people who are homeless or at risk of becoming homeless; Charlotte Maxwell Clinic, which supports low-income women in accessing integrative cancer care; and Beyond Emancipation, which supports foster and probation youth in making successful transitions to adulthood and living independently.

How do the tours work?

The individual tours are going to run Wednesdays through Sundays. They are four hour tours that include a Hella Thirsty, Hella Hungry stop. So, we’re definitely going to stop for lunch. On Fridays, Saturdays, and Sundays, we’ll stop at the farmers markets in Oakland, and on Wednesdays and Thursdays, we’ll stop at a food hall or other place there’s a lot of food options. This gives people some choice, as well as some time to look around. Because of that, every tour is going to be a bit different.

Another great thing is that I’m not tied to any one start or stop place – someone taking the tour just needs to get to the starting location on public transportation because I bring the bikes to the starting point.  Wednesdays will probably be more of a West Oakland focus, with Black Panthers sites. Fridays, Saturdays, and Sundays will cover Central Oakland. So, there’s always going to be a change in route based on the day. If you take a tour on a Wednesday versus a Saturday, you’re going to see some different parts of Oakland.  There’s a lot to see in a small amount of space. And, I’ve yet to even manage to get to all of the great things that Oakland has to offer. I’m really looking forward to expanding and having the tours five days a week, with different routes.

Also, I will be offering private or more customized tours. If you want to go to every independent small batch ice cream place in Oakland, I can make that happen.  If you want to see both Lake Merritt and Temescal, that’s a harder ride, but that can happen too.

The private tours will also include corporate tours.  As Oakland has become more popular and has been attracting the technology industry and folks from San Francisco, there is a real concern about gentrification and displacement. Pushing out the very people who make the town what the town is.  And so, one of the things I’d like to do through corporate tours is give people some background on Oakland.  One of the main complaints about these corporations is that people come in and they don’t know anything about Oakland or its history. Through my corporate tours, businesses can get some good information, understand some of the culture and background of Oakland, see the diversity that makes Oakland great, and then be more cognizant of that as they do their work in Oakland. The tours can be useful as a corporate team builder while providing a connection to Oakland.

So, you haven’t officially launched yet. When’s your official launch and how are you preparing for it?

My official launch is April 2018.  The business is fairly seasonal.  The weather around here goes all over the place, but generally April to October is a good time to be riding your bike, unless we go back into drought and maybe tours will go into the winter.  But it is a seasonal business, so the plan is to launch in April for sure.

A lot of things are going into the launch. A big one is that I’m in the middle of an Indiegogo campaign, where I’m raising funds from friends and family and hopefully from strangers as well who want to see this succeed—people who want to see a black-owned, woman-owned, LGBT-owned business come to fruition here in Oakland. And, on the back end of that, I plan to apply for additional funding from lenders. With that funding, I’ll be able to get all the bikes and accessories and make sure that I have the all my legal and insurance needs met.

I’m about a third of the way there with Indiegogo right now.  I’m raising $18,000, and I’m close to $6,000 right now.  There’s a video highlighting one of the tours that I did and I also talked about the fundraising climate. I understand it’s a really tough time to raise money right now. There’s donor fatigue and the holiday season coming up.  But hopefully the spirit of This Is Oakland Bike Tours comes through as a really entertaining, quirky way to see Oakland, and to highlight some things you can’t see on a walking tour or can’t stop at necessarily or see well from a car.

What has been the most fun thing about building this business so far?

Going out with folks on the tour and trying to figure out what’s the best route to take and how we can see a fantastic mural at 19th and Webster and still get over to some public art in the Uptown area.  The most fun part has really been planning out the routes that I’m going to take and figuring out where to stop for snacks to introduce people to Oakland’s secret food.  Not just the places that are written up, but there’s some places in Chinatown and Uptown that aren’t recognized as much.  Oaklanders know about them, and I want to get that out there too.

What do you feel is the most challenging thing about building this business so far?

I really want the business to be word of mouth. I know that people seeing me on the street is going to be super helpful. But, the other part is reaching out and making sure people know that it’s available.

As a 46-year old who does not use social media a lot, trying to make sure that people know about the business is probably the biggest challenge.

I see you posting on social media now.  How did you overcome this challenge?

I take on every person I meet as a mentor, whether they know it or not. People have given me some really good information on ways to make that easier and more friendly to someone who doesn’t use social media a whole bunch. Now, I feel I’ve got all these ways and means of getting onto and spreading the word through social media. And, I think for anyone else who’s trying to do something like this, just continue to ask questions and continue to listen people from different perspectives and age groups. You never know what little gem someone’s going to hand you just in casual conversation.  And, that’s what’s happened a lot. I’ve been talking to people who are already successful in Oakland, whether their business is online, through pop-ups or mobile, or brick-and-mortar, and trying to make sure that I’m being open to the information that’s out there.  Because there’s a lot out there. There’s a lot of resources.

What advice do you have for people just starting a business?

The best advice is to just to be fearless. I have to tap into that all the time. And, I just have to go ahead and jump. It sounds so cliché, but it’s true. There are a lot of times when you’re going through the processes and the steps to run a business, you’re going to run into things you’re afraid of. You just have to give it a go. And that can be really difficult if you are at all risk averse. And I am in a lot ways, very risk averse. So, I recommend to anyone: be fearless, take the leap, and find those resources to help you land smoothly.

Oh my gosh, that’s really difficult! There are so many.  But I do have a few go-tos.  We have a volcano in Sibley Park. Walt Disney came to Fairyland to get ideas for what turned out to be Disneyland and he even hired the first director of Fairyland to work at Disneyland. If you ever had free lunch in a school, it’s because of the Black Panthers. The Black Panthers did a free breakfast program in East Oakland. The plan and setup of that program was adopted nationally for free lunches offered at schools. That is something, as an Oaklander, I’m super proud of. As an educator, I’m super proud of. I think about all the kids who have been fed through the years through the free lunch program at every district across the country.